Chazda: I met publishers Agnes and Salem de Bezenac, a very nice couple who runs iCharacter Ltd., while at the 2015 Buchmesse in Frankfurt. Each year, they attend the fair, representing and selling their books, making new business contacts and meeting with old friends and associates. This is my interview…

Not being all that familiar with religious publishers, I scanned the booths for a friendly face. That’s when I met Salem. He invited me to sit down and we just chatted about the industry and about my dad’s manuscript (he’s written a chapter book on baptism). Pretty soon Agnes joined us – she had been away talking with another publisher.

What struck me immediately about Agnes and Salem was how receptive they were to talking with me. Not all publishers are. During our chat (and our subsequent interview later), I found out Salem is German but spent many years in America, and that Agnes is French and has lived in 15 different countries. This floored me. Both speak American Standard without any trace of an accent. 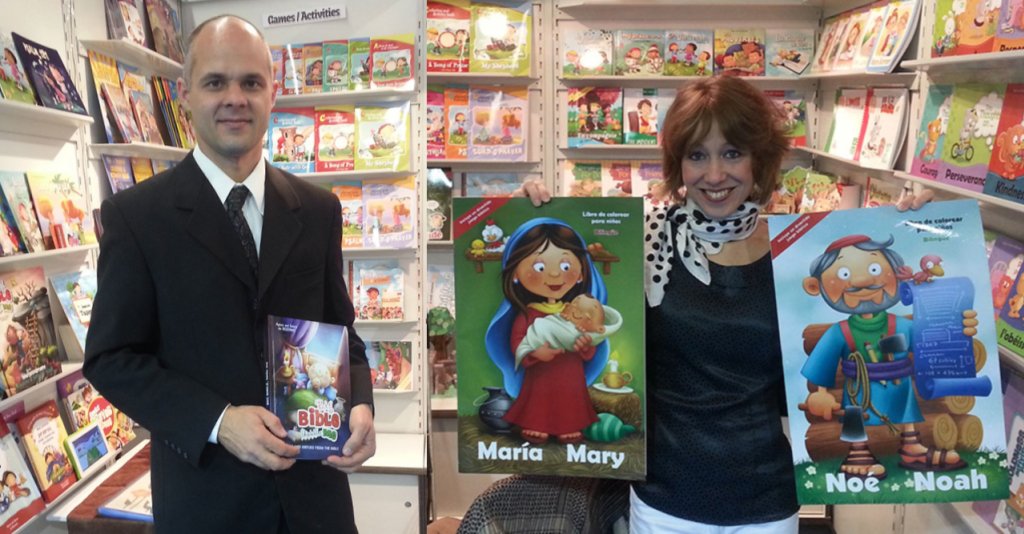 That globetrotting life experience gives Agnes her broad spectrum of tastes in cuisine and in different cultures. She loves, “Switzerland for its mountainous and lake postcard kind of scenery… Brazil for its jungle wild look, Mexico for its beaches, India for its food, Uganda for people’s smiles and simple acceptance.”

Both love the cuisine from all of these places, and Agnes has learned to cook Thai, Indian and Mexican foods. One of their favorite drinks on a cold morning is hot chicory with a little milk and sugar.

As parents of two kids, having a family was a big aspect of their deciding to write and illustrate books. Agnes says, “I felt called to create things for children. I started creating for my own children, as I didn’t find what I was looking for in the book industry.” As a pre-school teacher, mom and homeschooler, she has great ideas about how to do that. All of them are based on fun learning.

Agnes has a blog just about her homeschooling experiences and projects. You can check it out at www.EarlyLearningAtHome.com.

The Book Fair in Frankfurt – Buchmesse 2015

When I asked about their Buchmesse experience, Salem explained, “The first couple of years we did not have a stand to display our books. It made it difficult to meet buyers that way, as generally the stands are for sellers and the buyers are walking around. So as a seller of rights, we had to get a physical presence in order to be found.

“Once you have the simplest and cheapest stand, you can feel rather insignificant compared to others around. But our experience has been that buyers are looking for content, and not fancy stands. I would also add, that the Buchmesse is the best bang-for-the-buck that you can get compared to other book fairs in the world. It’s very well organized and the price is very attainable for the small publishers. More so than any other book fair, or so I’ve been told.”

The couple also finds their printers at the Buchmesse, to meet them personally. Salem and I are definitely on the same page with that. He says, “We prefer usually meeting our printers in person, and a book fair is a good place to find them. But after the initial contact, we keep in touch via email primarily, and phoning only if need be. Doing a small printing of just 1000 books is a good first time test to see how they perform. We’ve had a good working relationship with our printers so far, and if we treat them with respect and good business ethics, then we get the same in return. For environment reasons, we’ve also tried to do our printing within the continent that the books get distributed in.” 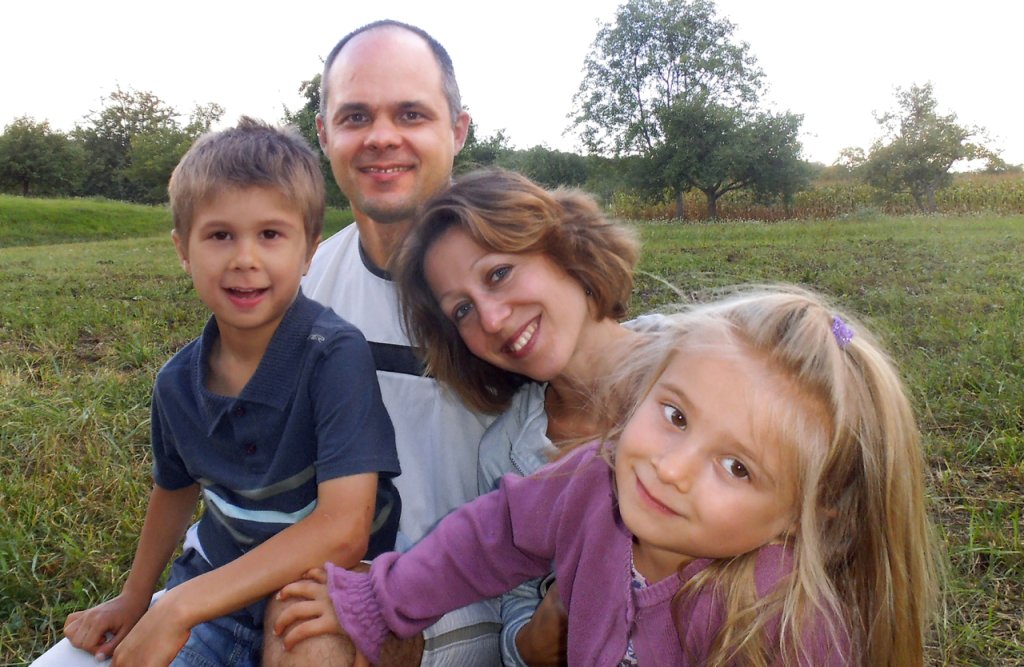 I took their picture – no easy task, as Salem is quite tall and Agnes is a bitty thing (those pictures didn’t turn out – I’m a terrible photographer). When it comes to shoes for Agnes, “…I’m quite short; I do like the heels. My only problem is that my shoe size is in the kids’ section and they rarely have heels. So it takes me a long while to find shoes that I like and that fit me, and don’t look too much like kids’ shoes either. Kind of a problem sometimes.”

Salem jokes that he wears “Poopdodgers. A unique brand of shoes that scans the floor ahead and warns the wearer of any potential unpleasant mounds.” I can think of several towns where shoes like that would come in very handy.

Whenever I interview someone, I always ask one question in particular. It’s always the last question, because I feel there’s usually something I just don’t know to ask. So my last question is, “What question have I not asked that you would like to answer?”

In this case, that question was, “Was there a difficult event in your life that this project came out of?”

What Agnes and Salem had to share really shocked me, made me angry and teary-eyed, and then made me appreciate all the more why they do what they do.

This is what happened, why they launched iCharacter.

Agnes: We were living in Mexico for 11 years, where we were involved in creating English and Spanish Christian products for children. But priorities were altered when at 7 am, during my exercise walk close to our house, three masked gunmen grabbed me and threw me into their car.

They hit and punched me repeatedly for the next 45 minutes, as they drove out of the city. I felt deep inside that I should not stop talking about my faith and talking about the mission work we do.

I could not see where we were going, because I was pushed down to the floor of the car, and I had a bag over my head. But after some time I realized that we were driving on a dirt country road. That’s when I started singing out loud to keep myself from panicking.

After about 15 minutes of speeding down the dirt road, the car slowed down a bit and the men said to me, “We’re going to let you go now. But the only reason is because we respect your faith in God.” And with that, they took the jewelry and watch I was wearing and threw me out of the moving car.

The next thing that I can remember is standing on the dirt road, shaking and covered in mud, wondering which direction was civilization.

It took me about 30 minutes of walking until I came to a gas station on the side of a highway, where I was able to phone my husband for help, who was at home with our kids.

As a result of the experience I have some spinal injuries, which still affect me to this day. [My note: This is why Agnes can’t sit too long at the computer, writing. Something she mentioned to me in passing.]

Salem: Our Mexican friends felt mad that their people could do such horrible things, and I personally had to get over thinking about what I would have done if I had been there. We both decided that we would forgive them. Even though these men would not know that we had forgiven them, forgiveness is something that benefits us the most.

Agnes: Ten months later, while my husband was on a filming project in another city, I was at home with our two small children, when four different armed men quietly broke into our house at lunchtime. I could not believe that something was happening to me again. This time I was upset inside, but I had to remain calm for my children’s sake.

They held knives to the children’s throats and demanded that I give them all our money or they were going to take my kids away. We were then locked into the bathroom as they tore through the house and stole the rest of our valuables that they found.

Thankfully our neighbors were very helpful after the ordeal, and helped me with the children and handling the guards and police who arrived afterward.

This second incident affected me much more, because it also involved our children. And I was finding it much more difficult. After the first experience, I didn’t feel safe while out, but now I didn’t even feel safe at home.

Salem: Our first reaction was that we had enough, and to leave the country right away, but we decided that it was not a good time to make that decision in the middle of emotional turmoil, so we waited a week to let our feelings calm down and to find God’s perspective before making plans.

There is a healing process that we had to go through from these two events. We had the option of pursuing the criminals, but we decided that using our energy to move ahead with our lives and projects was much more beneficial.

Yes, we did lose most of our valuables, and to this day we wish we still had some of them for our projects, but in the end, it’s just stuff. We had our lives, and that was most important. Besides that, God has all the resources He needs to adequately care for us in our losses.

And that’s what God did; he took care of us, not our stuff. He protected what really mattered, our lives. And for that we are grateful.

Tragedy is not replaced by joy; it is turned into joy. And we came to realize that peace and satisfaction don’t come from replacing the things we lost, but from the healing process of forgiveness and change of priorities.

Agnes: It’s human nature to feel like getting revenge, but our character has grown so much more than if we had decided not to forgive. Through this whole ordeal, it most of all realigned our priorities and gave us even more of a burden and desire to make good moral material for children.

I was saved twice by a total miracle and it only proved to me that God had a mission for me, something He wanted me to accomplish for His glory. Moving step by step into this dream, with God walking side by side, has been some of the happiest days of my life. I can truly claim the verse Jeremiah 29:11. “‘For I know the plans I have for you,’ declares the Lord, ‘plans to prosper you and not to harm you, plans to give you hope and a future.’”

Agnes and Salem publish ~10 titles per year through iCharacter Ltd.

Keep creating, no matter what.